These are the archive pages for the 2013-14 C.S. Lewis 50th Anniversary Celebration. For info on future events, visit cslewis.org

C.S. Lewis decided midway through his life that the Imagination is more powerful than Reason in changing people’s world views.  At that point he finished writing all his famous Christian apologetic books and wrote the Narnia series, etc.  This session will look at how Christians must learn to trust “story” to make their points in a postmodern world, especially when it comes to film.  How does “story” work, and how does our story work? 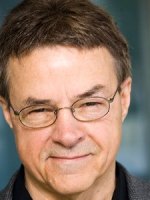 Jack Hafer is an Associate Professor and Chairman of the Biola University’s Cinema and Media Arts department. Jack’s film industry credits include his role as producer of the award-winning feature film, To End All Wars, starring Kiefer Sutherland and Robert Carlyle. It won Best Picture at the Heartland Film Festival, was awarded the Commander in Chief Medal of Service, Honor and Pride by the Veterans of Foreign Wars, and showcased the 2003 Cannes Film Festival Cinema for Peace. A new directors cut was released in 2010.

He and his production company, Boulevard Pictures, represent a vast experience in the film & television studio business. As former Vice President and General Manager of GMT Studios in Culver City, Mr. Hafer oversaw the complete operations of this state-of-the-art film studio, best known for film projects such as Wag the Dog, LA Story, Kill Bill 1 & 2, Predator, Minority Report, Tequila Sunrise, and Blade 1 & 2. It was also during this time that Mr. Hafer formed the Culver City Film Studio Consortium, which included the heads of MGM Distribution, Culver City Studios, Columbia Pictures/Lorimar Studios as well as GMT Studios.

His PBS documentary, Wall of Separation, a history of the issue of the separation of church and state, aired on PBS in 2007. He has just completed a PBS documentary on stem cell research, “Lines That Divide”, and is working on another PBS documentary on problems in higher education that are making it more difficult to get a good education. His next feature will be filmed in the summer of 2010, a comedy titled Not That Funny, starring Tony Hale.

The C.S. Lewis Foundation offers a variety of programs, events, and resources for scholars, faculty, administrators as well as seekers and lay readers of all Christian traditions. Our mission is to advance the renewal of Christian thought and creative expression throughout the world of learning.